Here is the topics covered during the lecture and hope professors did enjoy the session :) 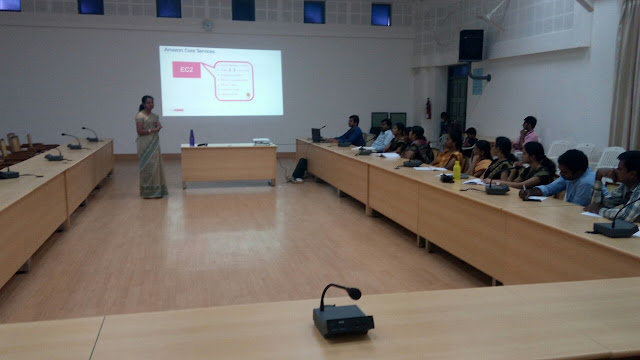 Refer the link to certificate of appreciation  from the college for the Guest Lecture. 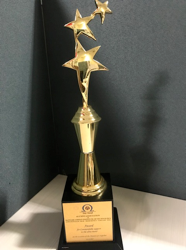 Appreciation goes a long way and a recognition from your Alma Mater after 17 yrs of your graduation is something close to your heart.
I was delighted to receive the Special Award from Bannari Amman Institute of Technology for my contribution towards the technical guidance & lectures to the college as well as to the Bengaluru based BIT Alumnae as a Secretary of  BIT Alumni Chapter, Bengaluru. 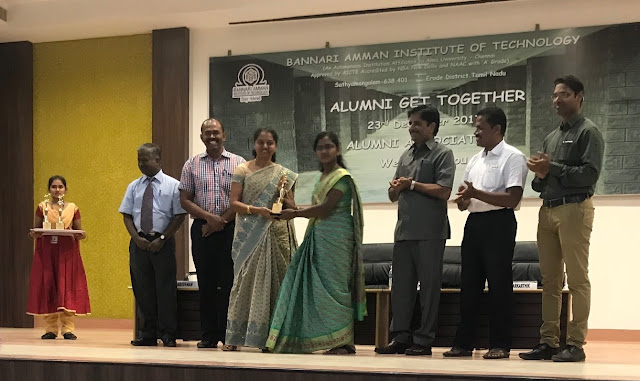 Note: Use sudo, if elevated privilege is required.
Posted by Bhuvana at 9:35 PM No comments:

The Sample Web Application depicted below will include Web Servers, App Servers and Database Servers
-       There are two Availability Zones (AZ) in the Sample Web Application, in order to provide high redundancy and therefore high availability
-       Subnet is nothing but the range of IP addresses in a VPC
-       Network ACLs stands for Network Access Control Lists that are applied to subnets
-       Each AZ has one private subnet and public subnet
-       All subnets within a VPC is designed to talk to each other freely
-       Only public subnets are accessible from the internet
-       Servers in the private subnet can only make outbound calls to the Internet via the NAT server. No inbound traffic is accepted.
-       NAT have only one purpose here  -> allows instances on private subnets to call out to the Internet to download updates. Traffic from the Internet is not permitted to make inbound connections
-       Traffic is further restricted via security groups
-       NAT Instance is relatively old service and we have an alternative now called NAT Gateway, which was introduced in Re-invent 2016
-       Basically NAT Instance is an EC2 instance with certain configurations where you have to establish ASG to scale-up or down and enable fault tolerance whereas in NAT Gateway both elasticity and failover are handled by AWS.
-       AWS Internet Gateway - An Internet gateway is a horizontally scaled, redundant, and highly available VPC component that allows communication between instances in your VPC and the Internet.
-       Amazon Route 53 (Route 53) is a scalable and highly available Domain Name System (DNS)


When the user access the website www.mycloudapp.com either from his computer or mobile, the request goes to Route 53, passes through Internet Gateway & Elastic Load Balancer before hitting the Web Servers in public subnet. The Application Servers and Database Servers are placed in private subnet which can be accessed only by Web Servers. These Servers in private subnet can make only outbound calls to the Internet where they get their software updates, which happens through VPC NAT Gateway.


-       ELB can automatically scales its request-handling capacity to meet the demands of application traffic.

Posted by Bhuvana at 1:09 PM No comments: